On Opening Day today, our JV Peglegs destroyed rival George Washington HS, 14-3 and it was so lopsided that GW’s coach asked if we could end the game, early. Our attack included 9 hits and 9 BBs, led by Jonathan Lee 2-2, 2 R, 2 rbi, BB and Julian Singer 2-2 R, rbi, BB and Matt Melucci 2-3 2 R and Julian Cunningham 1-1, 3 R, RBI, 2 BB. We were sloppy in the field for starter Jordan Gray.. which led to 3 unearned runs, and GW staked to a 3-0 lead. But Jordan tossed a No-Hitter the rest of the way – and our defense solidified, particularly Ben Harwayne and Christopher Liu. Can you believe it? Stuyvesant crushed GW, and might have just won the Manh Div on Opening Day?

[From Facebook. Coach Carlesi] Today the Peglegs dropped their first league game to West 50th Street Campus. Bad base running, many physical and mental errors in the field and only 1 hit from batters 6-9 was the recipe for the loss.
On a brighter note, we had good pitching from Malcolm Hubbell, we had 9 stolen bases and a great bunt by Daniel Kim. [Adapted from GameChanger] Stuyvesant fell to West 50th Street 7-5 on Wednesday on the final play of the game. West 50th Street was down 5-4 in the bottom of the seventh inning when JC Juarez homered on the first pitch of the at bat, scoring three runs.

Stuyvesant got things moving in the first inning. Jared Asch drove in two when he doubled.

Malcolm Hubbell was on the hill for Stuyvesant. He surrendered four runs on seven hits over five innings, striking out four. Matthew Deutsch and Jeremy Rubin entered the game from the bullpen, throwing one inning and one-third of an inning respectively.

The Peglegs are now 3-0 in league play with another win today against West 50 Street Campus. The final score was 7-4. Great pitching by Jared Asch and timely hitting by Daniel Kim with a 3 run triple. Matthew Deutsch came in to get the save.
This was a nail biter but in the end the Peglegs did not fold under pressure. Congrats boys.

Jared Asch got the start for Stuyvesant. He lasted six innings, allowing three hits and four runs while striking out six.

The Peglegs had nine hits in the game. Jeremy Rubin and Cooper Nissenbaum each had multiple hits. Rubin led Stuyvesant with two stolen bases, as they ran wild on the base paths with five stolen bases.

Congrats to the Peglegs on their second league win over Norman Thomas 14-1. Great pitching by Malcolm Hubbell and Matt Deutsch. Big hits from Cooper Nissenbaum and Jared Asch.

Tomorrow the Peglegs take on our division rivals West 50th Street Campus. Game time at the Pier will be 4:15pm
Let’s go boys!!!

Stuyvesant PEGLEGS Varsity Claims Victory Over Norman Thomas In Blow-Out Fashion, 14-1
Stuyvesant had all cylinders firing on offense on Wednesday, winning big over Norman Thomas 14-1. The Peglegs got things started in the first inning. Jeremy Rubin drew a walk, scoring one run.
They put up five runs in the third inning. Stuyvesant’s offense in the inning was led by Owen Potter, Jared Asch, and Cooper Nissenbaum, who each had RBIs in the inning.

Malcolm Hubbell toed the rubber for Stuyvesant. He went three and two-thirds innings, allowing one run on three hits and striking out six.

Stuyvesant totaled 11 hits in the game. Potter, Asch, Nissenbaum, and Luca Bielski all managed multiple hits. Stuyvesant didn’t commit a single error in the field. Bielski had nine chances in the field, the most on the team.

Congrats to the Peglegs on their opening day win over Norman Thomas HS. Jared Asch and Jeremy Rubin combined for a 3 hit shutout. Jared also added 2 hits and the Peglegs walked 10 times and stole 10 bases. We return Wednesday to Pier 40 to faceoff against Norman Thomas again.

Stuyvesant defeated Norman Thomas 10-0 on Monday as two pitchers combined to throw a shutout. Stuyvesant secured the victory thanks to six runs in the fourth inning. Rubin, Owen Potter, Jared Asch, and Daniel Kim each had RBIs in the frame.

In the first inning, the Peglegs got their offense started when Jared Asch singled on the first pitch of the at bat, scoring one run.

Asch led things off on the mound for Stuyvesant. He lasted three innings, allowing two hits and zero runs while striking out nine and walking zero. Asch led Stuyvesantwith two hits in four at bats. Stuyvesant tore up the base paths, as three players stole at least two bases. Kim led the way with two. Stuyvesant was sure-handed and didn’t commit a single error. Luca Bielski made the most plays with 13.

In our first preseason game, the JV had an upset in sight (up 3-1 in the 5th inning at Monroe; leading 3-2 in the 6th). But we lost command of the strike-zone, late and surrendered 6 unanswered Rs mostly on walks. Overall, good effort on defense and on the mound — and maybe we let this one get away — but after this, our guys should feel like they can play with just about anyone. Final: 7-3 loss

At the annual Pegleg Awards Dinner on June 8, the JV and Varsity teams celebrated successful campaigns in 2018, as the coaches recognized many players for their contributions to the season’s heroics.

The JV squad, still basking in the glory of their Manhattan championship win over George Washington on June 6, had five of its players honored:

The Varsity squad, fresh off a surprising 10-6 season, saluted these seven players. 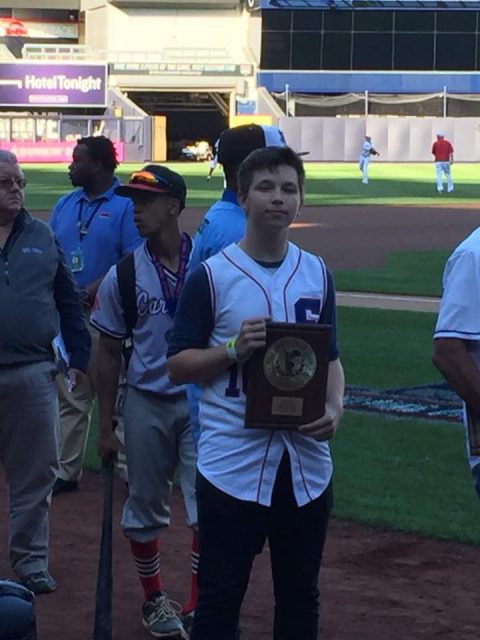 After one of the most dominant seasons ever recorded by a Stuyvesant pitcher, Jared Asch traveled to Yankee Stadium on June 11 for a ceremony honoring New York City’s top high-school baseball players. Though he was recognized for his 6-0 record in regular-season league games, Jared’s other stats are equally impressive: an ERA of 1.19, a WHIP of 1.02, two complete games, and a 4:1 K:BB ratio. The last Stuyvesant hurler to earn as many as 6 wins on the season was Evan Lubin, who performed the feat in 2012.

Shout it from the rooftops..! Your Peglegs are the Manhattan champions.. after stunning GW at Pier 40 by a 6-3 score. Ben Zenker pitched a CG with 7Ks and had a double, single and 2 rbi’s. Max Mah sparked our offense again scoring 2 runs. Julian Singer had 2 hits including crushing a 2 rbi double. Jordan Gray (rbi, run), Luca Bielski, Julian Cunningham and Elias Bernstein (run) all came through with singles when we needed them. Great team win. Great team.

[Facebook–Coach Nardiello] Our JV Peglegs bounced back in style vs. Manhattan Center today at Pier 40 winning 20-1. Leading the way was freshman Luca Bielski throwing a no-hitter in his first start (13 Ks, 3BB, 0 ER). Offense was relentless, as Luca, Max Mah, Masataka Mizuno (2 hits) and Elias Bernstein all scored 3 Runs apiece. Starting at 1B, Elias hit his first Stuy HR (2 RBI) late in the game. Steven Zakin had 2 RBI, Julian Singer had 2 hits, and Jooahn Sur & Rohan Saha both scored twice. We had 9 hits in 21 ABs, with 11 BBs, 7 stolen bases early.. and this one was over after 4 1/2 innings by Mercy rule. [Adapted from GameChanger]

The schedule for the 2022 season has not been released by the PSAL. Please check back in February.

The schedule for the 2022 season has not been released by the PSAL. Please check back in February.

Watch this space for the latest messages from our Coaches.

Who has the most hits in Peglegs history?

It’s a three way tie for the single-season record of 26 hits held by Samuel Faeder (2002), James Lainas (2002), and James Wendt (2006). Remember, records are made to be broken! Go to the Alumni tab and Stat Leaders for more Peglegs lore.