Stuy JV opened Division games with a solid 11-3 win over Randolph, played at Inwood. Cooper Nissenbaum threw 4 innings of 1-hit ball, striking out 6 (allowing 1 ER). Game was 3-3 until Matthew Deutsch helped break it open in the 3rd with an RBI double (he tripled, next AB). Owen Potter and Frank Liou drove in two, scored two and had 2 stolen bases apiece. Good defense was highlighted by Leo Greenleaf’s two running catches in LF, turning what seemed like sure extra-base hits into rally-ending outs.

Stuyvesant took the lead for good in the second inning to capture a back-and-forth game from Randolph Campus by an 11-3 score on Friday. The game was tied at three with the Peglegs batting in the top of the second when Frank Liou grounded out, scoring one run.

Stuyvesant Peglegs JV took an early lead in the first inning and added three runs in the second inning. Matt Deutsch doubled in one run. Stuyvesant scored six runs in the fourth inning. The big inning was thanks to a triple by Deutsch, a single by Owen Potter, and a error.

Cooper Nissenbaum earned the win for Stuyvesant, going four innings, surrendering three runs, one hit, and striking out six. Deutsch, Potter, and Frank Liou each drove in two runs to lead Stuyvesant.The Peglegs stole five bases during the game as two players stole more than one. Liou led the way with two.

The Peglegs dropped their third game of the season falling to West 50th Street Campus HS 7-1. Only highlight was Jack Archer’s RBI triple late in the game. Jack had two hits on the day. The Peglegs had many miscues and silent bats today.
The next game is Friday against John Bowne HS in Queens. The Peglegs will look for redemption after their playoff loss to John Bowne last year.
Let’s do it boys.

Stuyvesant PEGLEGS Varsity fell behind early and couldn’t come back in a 7-1 loss to West 50th Street on Wednesday. West 50th Street took the lead on a stolen base in the first inning and three runs in the fourth. Jack Archer went 2-for-3 at the plate for Stuyvesant, and he led the team with one run batted in.

Today the Peglegs improved their record to 10-2 with the defeat of West 50th Street HS. Final score 3-1. Jack Archer was great on the mound scattering 6 hits over 6 1/3 innings with 5 K’s and 1 earned run. Jeremy Rubin came in to get the final two outs. Kenneth Chu had two hit and Max Onderdonk came up big with a two strike RBI hit. Max had 2 RBI’s on the day and Solomon Medintz had the other. Great win today guys, let take another Wednesday. 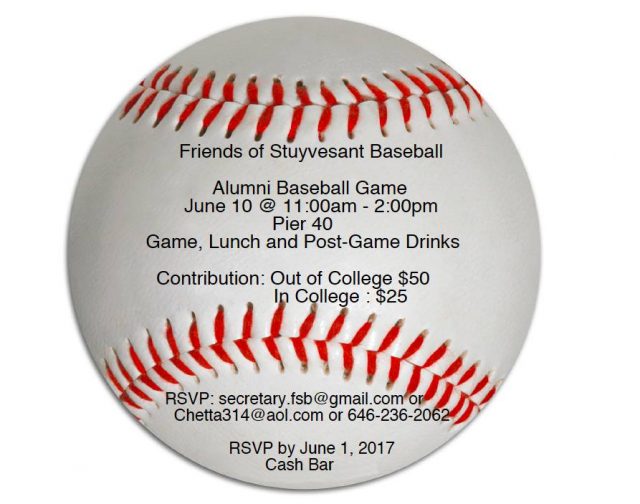 Another win today against Norman Thomas HS. Final score 9-3. Congratulations to Tobias Lange on another good outing (though he doesn’t think so). Tobias had 8 strikeouts, 3 walks, and 4 hits over 6 innings. Jack Archer went deep again with a mammoth 2 run homer.

Unbelievable guys!!! I know coach and I are very proud of you. This has been our best start that I can remember. 3 big games next week so let’s bring it to them.

Stuyvesant jumped out to an early lead over Norman Thomas and took home a 9-3 victory on Thursday. In the first inning, Kenneth Chu scored on a wild pitch, and Malcolm Hubbell singled home Solomon Medintz.

Stuyvesant collected eight hits. Jack Archer and Malcolm Hubbell each collected multiple hits, and Hubbell and Archer each drove in three runs to lead the Peglegs.

[via Facebook – Coach Carlesi] Congratulations to Jack Archer and the Peglegs on their 18-1 victory over Bryant HS today. Jack threw a no hitter, striking out 11 and walking 4 and hit a 2 run homer. The Peglegs managed 15 hits today, 9 walks and 2 stolen bases. Joseph Halim added 3 more hits today.

An early lead helped propel Stuyvesant to victory. Stuyvesant scored on a double by Jack Archer and singles by Dean Steinman, Max Onderdonk, and Jeremy Rubin in the first inning. The Peglegs scored ten runs in the third inning on two hits by Halim and singles by Malcolm Hubbell, Solomon Medintz, Steinman, and Rubin, as well as walks from Tobias Lange, Ronin Berzins, Onderdonk, Rubin, and Archer.

Archer earned the win for Stuyvesant by tossing five innings, giving up one run, no hits, and striking out 11. Emir Ramusevic took the loss for Bryant.  Stuyvesant collected 15 hits, with Halim, Archer, Rubin, Steinman, and Medintz each collecting multiple hits. Archer went 2-for-4 at the plate as he led the team with four runs batted in.

Stuyvesant defeated Beacon HS 3-2 on Friday thanks to a walk-off double. The game was tied at two with Stuyvesant batting in the bottom of the seventh when Joseph Halim doubled, driving in one run. The pitching was strong on both sides. Tobias Lange struck out seven, while Beacon pitchers sat down ten. Beacon took an early lead in the first inning. In the bottom of the fifth inning, however, Stuyvesant tied things up at two. The Peglegs scored one run when Lange singled with two outs in the fifth inning. Lange earned the win for Stuyvesant, going seven innings, giving up two runs, five hits, striking out seven, and walking zero. McBride took the loss for Beacon HS. He pitched five innings, allowing two runs, three hits, and striking out six. Joseph Halim led Stuyvesant with two runs batted in. He went 2-for-3 on the day.

After being down 4-0 after the 1st inning, Stuy JV comes back & beats Francis Lewis on Sunday morning, 8-5. Ben Zenker, Max Mah and Cooper Nissenbaum (save) bend/don’t break allowing only 1 run over last 6.1 innings. Team struck out 12 in combined effort. Our offense pressured their defense all game and included 2 hits from both Henry Carver and Owen Potter.

Stuy JV scores a road win at Lehman HS, 6-4 behind the combined pitching effort of Daniel Kim and Franklin Liou, good defense and timely hitting from Matthew Deutsch (rbi triple) and Henry Carver (triple among 3 hits). Impressive all around, including getting there for the 8:30 game start.

Stuyvesant Peglegs JV and Lehman traded the lead back-and-forth on Saturday, but eventually Stuyvesant prevailed 6-4. Stuyvesant took the lead for good in the fourth inning. The game was tied at four with the Peglegs batting in the top of the fourth when there was an error, scoring one run.

After Lehman went out to an early lead in the first inning, the Peglegs took the lead for good with two runs in the fourth inning. In that inning Henry Carver singled, driving in one run. Stuyvesant scored three runs in the second inning, starting with a walk by Owen Potter and a triple by Carver. Stuyvesant had nine hits in the game. Carver, Frank Liou, and Potter each collected multiple hits for Stuyvesant. Carver led the Peglegs  with two runs batted in. He went 3-for-3 on the day. Liou had three stolen bases, as the Peglegs ran wild on the base paths with seven stolen bases.

Congratulations to our Seniors on their graduation today. So proud of them and we will miss them. On to bigger and better things!!